Thank you for visiting the Frequently Asked Questions (FAQ) page. Herein you will find answers to the most common questions we have been asked over time, and what we feel may have not been asked yet. If you have more questions not covered here, please let us know.

A 360º Image is basically a spherical image! It is a composition of an image in a globe-like shape. There are two types of 360º images. The first type is with viewing perspective from inside the globe, where you either turn around to look at the image, or you spin the image to see it all. The second type is from an outside perspective. This is similar to having an object in your hand and spinning it to look view all of the sides.

For our purposes, we are mainly referring to spherical images which you will view from within/inside perspective.

A 360º image is generally a combination of 2 or more images taken from the same spot but covering different angles in order to display what the eye of a person can see if they stand in one position and turn around looking in every direction.

A 360º Image can be created by using a smartphone and a special app. It can also be created using a single camera with 2 or more lenses all working to capture and stitch together the images in one shot. Some are created by using a single DSLR Camera & different types of lenses. The type of lens will determine how many photos need to be taken and stitched together to create one spherical image. 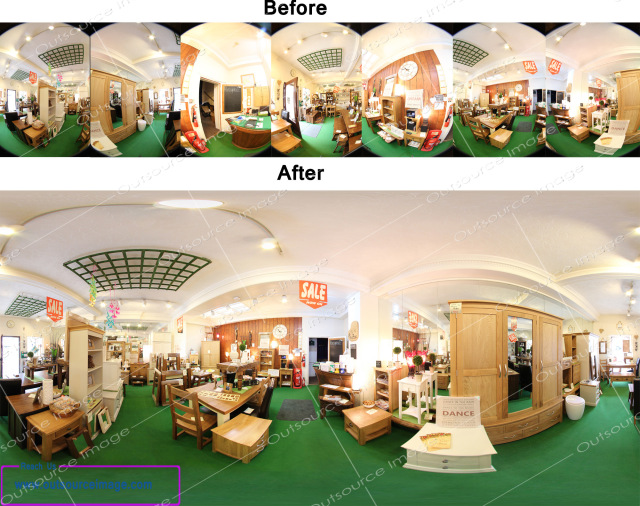 Of course today there are cameras that have lenses that can take only one photo (with single-lens) to capture the whole sphere (with exception of the camera footprint). There are cameras that can also do this using 2, 3, 4, or more lenses, meaning the images are actually merged at the time of capturing or some type of software is used in the camera to stitch/merge the images together to make a spherical image.

Is there a difference between a panoramic image and a spherical image?

Absolutely! An image qualifies to be called a panorama if more than one image has been combined/stitched to make a wide image. However, it does not have to cover or include everything in sight.

On the other hand, a spherical image has to capture everything from the floor to the ceiling and all around.

The following image should give a clear picture between a panoramic image and a spherical image.

Today almost any phone or camera is capable of creating a panorama, however, only a small percentage can actually create a spherical image

A 360º Virtual Tour is a combination of multiple 360º images (spherical images, otherwise called spheres) interconnected in a logical flow. Typically if we take spherical images of a business, we take them in a logical progression, to create natural flow as if you were actually walking into the business. You can turn right, left, move forward, back, look up, down, and all-around from the position you stand, just like in real life. So when all is said and done, a virtual tour allows you to have a natural (life-like) experience of visiting a place.

Any business or place that would like people to visit them, whether it be for leisure, emergency, or regular services needs to have a 360º Virtual Tour.

What are some examples of businesses that need a 360º Virtual Tour?

The list of businesses that need a 360º Virtual Tour is nonexhaustive! It is only limited to imagination, but here are some that we are aware of;

Is there any benefit for me to have a 360º Virtual Tour for my business?

The answer is yes and the reasoning is very simple.

IF you were about to travel to a new place, you ‘google’ a restaurant or hotel, two show up, they both have everything you want. They also cost about the same. However, one has a 360º Virtual Tour and you can see “everything” in it and about it. The other has boring photos or standard old-style video that only shows you what the camera person wants you to see… which will you choose?

If you answered  “the one where you can see everything” or “the one that has a 360º Virtual Tour”, you are not alone. You are in 99.9%. The other 1% did not understand the question!

In other words, you will always have an advantage over your competition who does not have the virtual tour created for their location… or they have a very cheaply made tour with inferior cameras and tools.

How can I get a 360º Virtual Tour created for my place?

If you have a business/public accessible area (or private area that you want to only keep for your family’s view sake) and you want a 360º Virtual Tour created. Just give us a call or use the contact form

The cost truly depends on how many images are needed to represent your business well to the public. Some businesses need as little as 5 spherical images, some may have as many as 100.
No two businesses are alike. Two restaurants occupying similar square meters/feet may have drastically different costs to cover. If a restaurant is open with minimum partitions and obstructions, it costs less compared to a restaurant with many partitions and corners. The minimum cost for Oman is RO 35.000 (with a minimum of 3 spherical images). Just give us a call or use the contact form, we will visit you at no charge and give you a quotation free of charge.

What do I need to know or do before getting a 360º Virtual Tour created for my place?

What is a hosted tour? Is it different from a virtual tour?

All tours have to be “hosted” by some server in order to be viewed by the public. Google virtual tours are tours that we create and host for free using Google servers. However, so far the Google-hosted tours have limited interaction, that is moving back and forth (following the arrows) and zooming in and out.

However, when people say a Hosted Tour, they mean a tour hosted away from (or in addition to) Google servers. With more interactive content such as clickable hot spots which then reveal more information such as Text, Photos, or even video content. In most cases, even the directional arrows can be changed and music can be added. The tour (spherical images) can be set to start rotating by themselves or movement automatically / sequentially move into the next scene/image until the viewer interacts with the current active image.

Do you have any more questions nor covered here?

Please use the contact form and send us your question as elaborately as possible so that we can make sure we cover all angles and your questions help others too.